This is a true story…

My wife Jennifer has confided in me that’s she’s had black cock before! 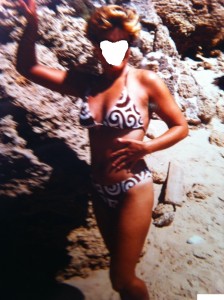 Let me describe her, she’s 5’5” a trim athletic 122 lbs, short brunette hair with hazel eyes. She is presently in her mid-forties & we have been married for only 7 years. The encounter happened years ago while she was single & in the military as an officer stationed in Portsmouth Virginia.  She had a coworker – black man named Brian. He was built like a football player or weight lifter & always had hot looking white “girlfriends” – which caused some curiosity. One day while she was out jogging on base…she veered off her route & ended up knocking on his BOQ room door!

Brian opened the door wearing a white t shirt & uniform trousers to be greeted by Jennifer standing there in jogging attire & sweating! She said not too many words were spoken as he invited her inside. She said it was very weird yet he KNEW why she was there … Once the door closed he removed his trousers & boxers & sat on the edge of the bed & stroked his black cock. She then walked over to him, dropped to her knees between his legs & took his black cock in her mouth.

She said he placed his huge hands on her head & moaned with pleasure as she was getting him hard. She said his thighs were very muscular like a football player & being between his legs with his thick cock in her mouth was thrilling yet scary. She knocked on his door only moments ago & now she was sucking his huge black cock hungrily. She said he was approximately 8” & extremely thick & his hand on her head was making her gag – which turned her on even more! He then removed her clothes to reveal her wet & dripping pussy. Placing her on her back on the floor he immediately dove for her pussy. She said his wide tongue & long black fingers were fucking her as she looked between her legs with this huge black man looking up at her in the afternoon light. He kept telling her that her pussy tasted like honey as he lapped & finger-fucked her to a shuddering orgasm before crawling up & mounting her.

She watched closely as he pressed his thick black cock to the opening of her pussy while she wrapped her legs around his massive frame & her hands grabbed his tight black ass & pulled him deeper into her. She told me he completely filled & stretched her as he started to thrust & grind into her. Then she say’s he started to fuck her complex & fast…banging into her with each thrust. She said he was extremely strong & lifted her small frame by her hips up to meet his complex black cock. He then pulled her up onto his lap in a sitting position while she rode him like a bull. His hungry mouth sought her pert nipples while his huge black hands slapped her ass & moved her up & down on his cock. While riding him she came again only this time on his huge black cock…while cumming she heard him say he was close as well, he grabbed her hips, thrust up into her & exploded into her wet pussy. After calming down Jennifer says she cleaned herself, received dressed & left. She never repeated the encounter yet she says it was astonishing to obtain thoroughly fucked by a well hung black man.